Juanjo’s Eulogy for Hugh – My mentor, friend and companion 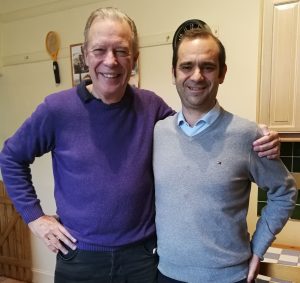 I was a Spanish academic researcher living in the UK who always wanted to commercialise some of my research through creating a company.  I have a happy family background but none of them went onto higher education nor were they high net worth individuals, a ground zero individual as Hugh used to say. So, while I was doing pretty well as an academic being part of a research group, which plays in the Champions League of international research, I thought, creating a biotech business was not for me, perhaps through a lack of self-belief.  Then, when the first real chance arrived at the end of 2009 at the age of 36, Hugh entered my life and transformed it for good. I was about to discover what it took to start and maintain a biotech company (spoiler, it isn’t as glamorous as it is thought to be). But this journey, which has lasted 11 years, was not just about business.   It was a daily lesson in how to operate in life, how to act when we make mistakes, how to treat each person in a unique way, how to work persistently and patiently to try to reach big dreams, and how deep down, the journey is much more important than the final destination.

I took the decision to hire Hugh as CEO Designate of DESTINA after interviewing 5 top candidates. The final decision of who to choose was an easy decision for me from the first minute I had met him. It has been one of the wisest decisions of my life. Apart from his vast business experience, he won me instantly, from first that moment when I met him in the Joseph Black Building, with his infectious smile and his energetic personality. I still remember where we met that rainy winter day with his raincoat. On the 16th of  December 2009 I called him to offer the position and since then, hey, what a hell of a ride I have had with him.

He did not start officially until January but on 17th-18 December we had already exchanged 7 emails!  Hugh’s emails were never a two-liner, all his emails were almost handcrafted with a lot of care and thought put into them.

Also, as Hugh was an extraordinary photographer, he used to attach photos taken by him to his emails. January 2010 was very snowy in Edinburgh and he sent me a picture of a snowman in the garden of his family house in Nile Grove. This was one of his trademarks, creating a good vibe with people regardless of the communication channels. He was very attentive to the little details that make people feel comfortable. When meeting face to face, always welcoming and saying hello to people with a smile on his face. Through the years I heard many times, “Juanjo, treat people properly, no one is less than anyone else, a smile on your face can make someone’s day.  He was so consistent and strict in behaving in this way and that has left a profound mark on me. He was a humanist who acted as such.

So, I started a journey with a man who had lived in three different continents, spoke perfect French, Indonesian, English, and a little bit of so many other languages, and had visited 62 countries including 26 States of the US (I think this is his final record). Hugh’s family background is book worthy, and one has already been written by Hugh’s sister. I have listened to him many times introducing himself to others and each time, he did it with the same emotion, which others picked up on. I loved seeing the reaction on people’s faces when he introduced himself and never grew bored witnessing this.   I cannot count the times people came to ask me after meeting Hugh for the first time, “Juanjo, is he really as unique as he seems?”.   My answer was to everyone: “he is transparent, what you see is what you get”.  Actually, when I went back home after meeting him for the first time I said to my wife Rosario, “I just met the future CEO of the NewCo (DESTINA) and he seems to me like a movie character”. In my world, these types of personalities did not exist apart from the movies. Today, I could say to Juanjo of 2009, yes, you are entering a movie with him. My only complaint is that I really wish this movie had lasted so much longer.

He also brought to our lives his soul-mate, Margaret who was his anchor and is so important to my family, the DESTINA family and many others. You can understand and explain Hugh’s personality and his impact on other people’s lives only when you know Margaret.

We started the company with little capital but with tons of hopes and dreams. He gave me the confidence to start believing I could leave the academic world and start exploring the biotech one. We instantly connected with each other on so many levels, which allowed us to go through some very challenging moments. As I said, biotech is not that glamorous so you have to be ready to get through thick and thin. In any case, time was always his big ally, he was always right. We added Sue and Salvo to the starting team, and the two ground zero Mediterranean guys learnt from Hugh massively. Hugh opened a window to the world for us.  We became his protegees and Hugh and Margaret became literally part of our extended families. Alba and Jorge, my son and daughter, were fortunate to know him and his impact on them will last forever. Hugh always respected the singularity of each individual and he had the patience and generosity to accept Salvo and I as we were.

He supported me and stuck with me when I had to move with my family to Spain. Typically Hugh, he converted a problem into an opportunity and in 2012 we incorporated DESTINA Genomica SL, our subsidiary in Spain. This meant that Sue, Claudia and Elisa did not move with us and we needed to part company with them. This was difficult but I learnt another lesson from him about treating people correctly in challenging circumstances.

The days of the incorporation of DESTINA in Spain are memorable, he labelled them as “Stamp, Photocopies and ‘Pero’….” We were very lucky to have Quique to assist us in setting up DESTINA in Spain. And there was another lesson about staying patient and calm when addressing critical challenges and never, ever, play the blame game. The three Ps which he always followed were, be Patient, Persistent and Professional. So, we had a biotech company established in the city of Granada where years previously I had taken my first steps as an adult.  And there too the DESTINA family started growing under his values: ethical and honest by nature, team orientated, resilience to overcome challenges through innovation and persistence, courage to accept failure, doing things to improve people lives and to lead by example.

We had Salvo and Quique followed by Mavys, another ground zero person who he respected so much.  We managed to lure Antonio Fara to leave the UK and come to Spain, Hugh and Margaret always found the time when they were in Spain to have lunches with him, followed by Bárbara, his ‘samurai’, Marin, our renaissance man, and our chemists Pepo and Javi, he always admired their ability to deliver key reagents. No one has left DESTINA under his reign since then. He was so proud of this. Why is that? He gave everyone their time and space and treated everyone in a unique manner. Also, he never blamed anyone.

Since he has left us, I have had to fill his shoes several times to conclude some of his latest  business deals.  Each time, I start very nervously but then I get into a rhythm by being very concentrated on what he has taught me.  Also, some of his words continue to resonate with me when decisions don’t go in our favour;  “Juanjo, c’èst la vie or Juanjo, just get up again”.

Hugh was a gift for me, my family and for so many other people.

Hugh created the DESTINA way of doing business which will be part of his lasting legacy. He impacted so many lives and I will continue my commitment to him, his vision and his family.